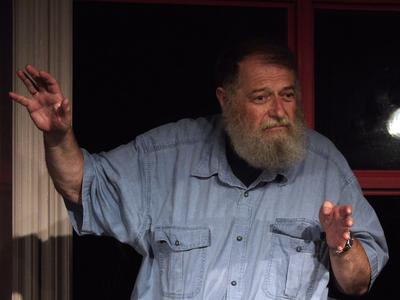 Gary Green is a storyteller and author who has performed both inside and outside the province for a variety of groups ranging from youth camps to international conferences. Among the groups for which he has performed are the Gros Morne Fall Fest, Cape St. Mary's Performance Series, Battle Harbour Historic Trust, Canadian National Storytelling Conference, Admiralty House Museum, St. John's Folk Festival and Trails, Tales and Tunes.

Gary has performed on television as part of the series "Legends and Lore of the North Atlantic" and on several radio stations. He has performed in the international award winning productions "Inside Outside Battery" and "Foghorns and Heartbreak". Gary has been a consultant for the use of storytelling in the interpretation of the Battle Harbour National Historic Site, the Point Amour Lighthouse Provincial Historic Site and is very active in developing and delivering a story-based interpretation of The Crow's Nest Officers' Club National Historic Site. 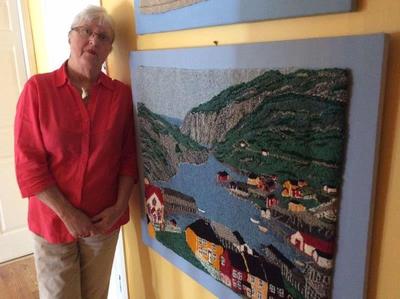 Ruth has been a mat maker since 1995. She works primarily with wool yarn to create mats which capture Newfoundland and Labrador past and present especially as it relates to her connections to places throughout the province.

Though her works vary in size, Ruth particularly likes large scale mats. Some of her larger pieces include Portugal Cove c1920, Quidi Vidi c1900, the Battery c1960 as well as modern day Quirpon and Fortune, GNP.

She has been interviewed for radio broadcast, podcast and live events. Her works hang in private collections across Canada. She has taught mat making for the Provincial Museum, the provincial Youth Heritage Forum and to private students. Ruth also has expertise in the art of dancing jig dolls and medieval brass rubbings. 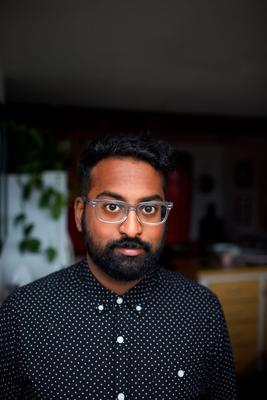 Romesh Thavanathan is a multi-instrumentalist, composer, producer, best known as a core member of the band Hey Rosetta! where he plays a wide variety of instruments, often switching between cello, guitar, keyboards, and percussion. After graduating from Memorial University of Newfoundland with a Bachelor of Music (Honours) degree in performance, he has toured internationally with Hey Rosetta! for the last 9 years while also producing and composing material under the moniker Tiny Emperor. 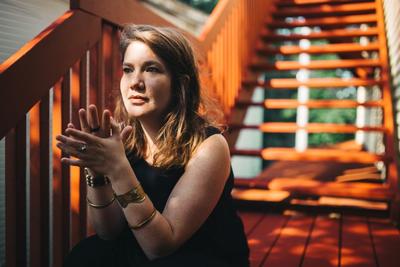 Joanna Barker is a singer, songwriter and musician of Innu, Mi'kmaq, Irish and British ancestry and a member of Qalipu Mi'kmaq First Nation. Her album, February, was nominated for two Music NL awards and shortlisted for the Atlantis Music Prize. Currently living in St John's, Joanna is the Co-Director of St. John's Womxn in Music (SWIM) and the Programming Director at Girls Rock NL. Girls Rock NL is a volunteer run, non-profit organization based in St.John's, NL. We seek to build a more supportive environment for women in the arts, while using music as a framework to encourage young girls to rock out in all aspects of their lives. 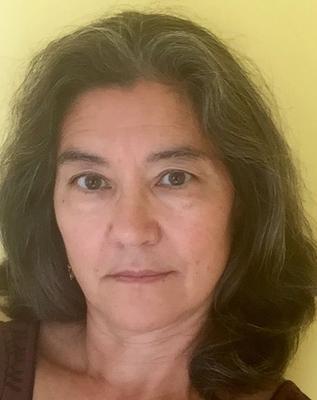 Kathleen Hicks born in Ottawa, Ontario, now residing in Wallace, Nova Scotia is a teacher-mentor. She has taught and coached music, visual art, dance and gymnastics to multitudes of young people, in four provinces, for over 40 years. Her early dance training was in Ottawa, taking ballet classes in both R.A.D and Cecchetti methods. She was also part of the Ottawa Gymnastics Team, attending camps at York University, and competing throughout the province. After completing her music and teacher training at Queen's University she headed to Labrador in 1982, hired to teach music at Peacock Academy. In 1983 she founded a community dance program (later named 'Let's Dance' HVGB), and a school gymnastics program, which expanded and moved to the Labrador Training Centre, the Labrador Lites Gymnastics Club. Always interested in learning, Kathleen has often taken summer classes at the Ottawa School of Dance, and participated in numerous workshops and seminars in dance, theatre and music throughout the years.

Kathleen developed a keen interest in costumes and costume design, learning how to operate a sewing machine at age 11, and at age 34 discovered the magic of a serger. She has had the opportunity to pursue this interest over the decades, sewing thousands costumes for Labrador productions with Mokami Players, local school musical theatre shows, High School Drama Festival, and 'Let's Dance'.

This 42nd Festival marks the third time that Kathleen has had pleasure of being a LCAF Visiting Artist (1997 Dance/Choreography, 2005 singing with Northern Mosaic) and she is honoured to be invited back to Labrador. 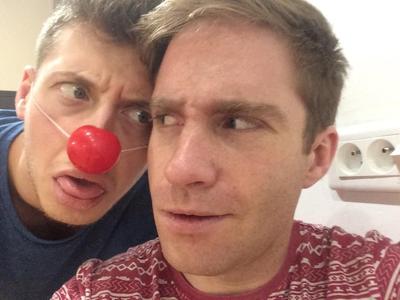 Steve Day is a writer, actor, and clown, based in Montreal. Prior to a
quarter-life crisis which spurred him to study clown and theatre intensively, he
worked as a personal support worker for people with disabilities, then coordinated
youth community development projects with Katimavik and Canada World Youth.

He trained in clown and bouffon (satirical clown) with several Canadian
teachers before dedicating two years to studying clown and theatre at Ecole Philippe
Gaulier, in Paris. Philippe Gaulier is widely considered to be the foremost living
teacher of clown.

No floppy shoes, face paint, or creepy giggling: Clown is about having fun with
our natural idiocy, following impulses, playing with the audience. Steve's workshops
focus on play, complicity, pretending, audience connection, honesty, stupidity, and
above all, not being boring.

Steve wrote, acted, and produced Waiting For Batteries , a critically acclaimed
dark comedy about an autistic man in a group home, for the Atlantic Fringe Festival
2014 in Halifax; and in 2017 he co-directed, co-acted and produced Fool Muun
Komming!! at the London Fringe, which won "Outstanding Solo Show" and which will
be produced, to critical acclaim, in several Fringe festivals across Canada in 2018.

This is Steve's fifth time in Labrador, where he's made some good friends
through the years. He lived in Northwest River in 2009-2010, when he worked with
Katimavik. 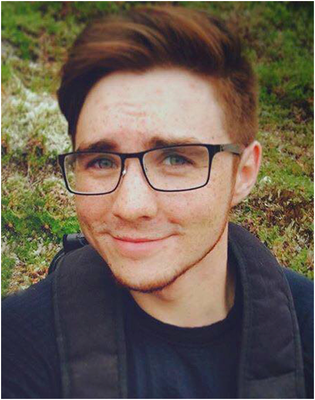 Bronson Jacque is a freelance artist from Postville, Labrador, who has been making art since 2009. He specialized in colored pencil drawings and has recently begun to try his hand in other mediums such as oil paints, ink, 3D modelling, and digital art. Bronson is self-taught. He gives the credit to his family of artists of all disciplines for his inherent love for art, and also growing up in a small town where finding something to do meant getting creative. He would spend his time researching the techniques and admiring the work of great artists, always happy to find someone new with a unique style. Enjoying most to make art for friends, of musicians he listened to, and actors from his favourite movies, portraits quickly became his favourite field of drawing.

To check out some pieces you can find him on his Facebook group 'Bronson Jacque Art'. He attended the Labrador Creative Arts Festival in 2010, 2011, and 2012 as a student participant. His favourite quote is that of the famous painter, Bob Ross, "Talent is a pursued interest. Anything that you're willing to practice, you can do.". Bronson Jacque currently lives in St. John's, Newfoundland with his girlfriend Jessica and their sphynx kitten, Evie.
Additional workshop sessions given by:

A graduate of Nova Scotia College of Art and Design, Nunavik artist Isabella Rose Weetaluktuk received her first little camcorder at 14. While hiking in Victoria she observed small things closely, developing patience with small creatures and light. The first question she asks when creating is: "What does my voice contribute to this conversation?" 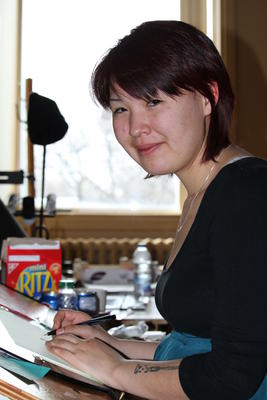 Echo Henoche is an 18 years old fine artist from Nain Labrador, part of a new wave of indigenous creators making their stories and art practices visible to Canada and the world. She was always inspired by her grandfather, Inuit carver Gilbert Hay and she just completed her first animated short film, SHAMAN based on a polar bear legend.
Wide Awake Tour- Inuit Identity through Film Project

This year's theme at the Festival is Vision and the project we have in mind stemmed from the Inuit Studies Conference in St. John's held last fall. It involves an exciting Inuit film initiative called The Wide Awake Tour 'for Inuit created by the National Film Board of Canada and Indian and Northern Affairs as well as the Nunavut Department of Education (Kat Baulu contact). This initiative would take young people through a number of films regarding Inuit identity and their place in a Canadian northern framework through the importance of learning traditional knowledge by elders and the Inuit relationship to their history and the environment. The two featured filmmakers would be Isabella Weetaluktuk from Nunavik (Montreal) and Echo Henoche from Nunatsiavut (Nain) They would make an appearance at one evening of the Labrador Creative Arts Festival in Goose Bay and then conduct workshops and presentations in the five Nunatsiavut schools (Rigolet, Postville, Makkovik, Hopedale and Nain ) during the following week. They will show films they have made in the past year- Three Thousand and Shaman -one is an animation film and one is on Inuit tattooing. Workshops around these films would by documented by Ryan Winters from Hopedale so that an educational resource and CD could come from this project. Young people in each community who have an interest in filmmaking may become part of a mentorship group to be formed by the National Film Board soon.
What's New
What's New
The IkKaumajammik Project
2018 Festival Year is near!
This Years Festival Animateur Is...
Festival 2017 Is Coming!!!
Annual General Meeting 2017
It Can Be Done!
How to Create a Community Play
By Tim Borlase
Download the PDF
Labrador Creative Arts Festival Button Design